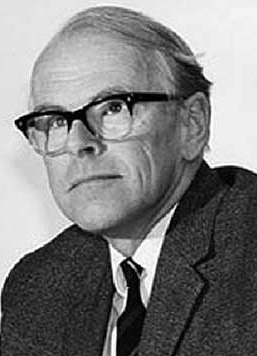 Burkitt had a very distinguish medical career including the identification of Burkitt’s Lymphoma. Extensive literature and related material can be found in the Wellcome Trust Library Archives.

A brief synopsis of his career can be found on Wikipedia.

He was a friend of our President Michael Crawford, who remembers some of the fundamental work he did.

Burkitt spent time as a medical officer in East Africa in WWII, and subsequently a significant part of his career there in mission hospitals. He authored a number of well-regarded books, and was evidently very dedicated, knowledgeable, skilled and highly qualified. His observations on the emergence of western disease are thoughtful and evidenced based. He comes to the topic with no particular dietary agenda,

He had a wide network of colleagues in other charitable hospitals globally, allowing him to compare experiences and observations on comparative levels of emergence and presence of western diet in local population groups. He conducted and recorded a number of surveys on the topic,

He, like a number of doctors working in locations with populations relatively uninfluenced by western lifestyles, was struck by the low incidence among them, of non-communicable diseases of ‘civilisation’ then becoming common in the ‘west’ that later became termed ‘Western Diseases’.

His observations lead to him considering the health implications of falling fiber in the western diet, as well as wider dietary factors. He co-authored “Western Diseses; their emergence and prevention”, a unique collection of material looking at the comparative incidence of ‘Western Disease’ in non-westernised and western food intake population groups.

Based on his observations of the fat intake in non-westernised diets, and a feeling that excess animal fats were problematic for human health, he supported the growing movement that saturated fats (animal fats), and particularly in excess were a health issue.

We now arguably know the problems presented as associated with increased ‘saturated fat’ intake, including by Ancel Keys, in reality represent a mix of dietary and lifestyle changes, which issues are discussed in more detail on the McCarrison web site nutrition page titled ‘Fats – The Saturated v Polyunsaturated – Animal v. Vegetable fat – The Debate’

The importance of fiber to health was one of Burkitt’s main propositions, and there are very good reasons, why fiber as a constituent part of relatively unprocessed foods, is very important to health. However fiber is only one of a number of important factors in declining health and rising western non-communicable conditions consequent on the westernisation of foods; others, as identified by McCarrison, include loss of minerals, vitamins and other essential nutrients, which we now know include factors such as easily damaged proteins, loss of plant related antioxidants, and refined over-processed foods generally.

The greatest issue is that we have largely become entranced, mesmerised, by everything related to food including; growing and raising, processing, storage and cooking (including celebrity Chef programs), except the nutritional value of what we are producing and eating. Evidence suggest we can improve health through diet, but are failing to do so.

Burkitt’s view are summarised in the synopsis of a talk ‘Turn off the Taps’ he gave at the McCarrison Society AGM, reported in their 1989 newsletter, which was kindly provided by Elizabeth and Neville Gay.

Burkitt, a respected and eminent physician, finishes with a powerful, humourous, and thought provoking conclusion, an allegory of experiences as a doctor, who lost an eye as a child, who had a strong Christian ethic, and passion for helping people, with a central message that diet matters to health.

His views were born of his observations as a skilled medical practitioner, that at the outset, but not end of his career, there, non-westernised groups rarely experienced significant ‘western disease’ levels.

“Alternatively, imagine water running from a tap. The basin is overflowing, the floor is flooded, and two gentlemen, highly dedicated, highly trained and motivated, have a sole purpose in life, to try and keep the floor dry. They spend ten, fifteen hours a day, mopping the floor. But they do not turn off the tap.

Now of course the water from the tap represents the cause of disease, the floods on the floor are the diseases filling our hospitals.

Fifty years ago I spent five years as an undergraduate medical student learning how to mop floors. Nobody told me anything about turning off taps. As soon as I graduated I went off and did higher diplomas in electronic mops, improved brushes and I spent nearly thirty years of my life mopping floors before I became aware of the importance and possibility of turning off taps.

Only by straightening the shelf and turning off the tap will we ever reduce our disease; never by improving the glue or the methods of mopping. I call to mind the comment made by the American poet Ogden Nash of Baltimore, who once said,  ‘We are making great progress, but we are heading in the wrong direction.'”

Western Diseases: their emergence and prevention

As well of being the author of other important books, he co-authored the arguably highly significant edited collection of papers on the incidence of Western Disease in non westernised populations called ‘Western Diseases: their emergence and prevention’.

By way of indication of the observations of Burkitt and Trowel, the important content and the wide range of groups considered in ‘Western Diseases: their emergence and prevention’ the preface and index is included below. The book is out of print so far as we know. 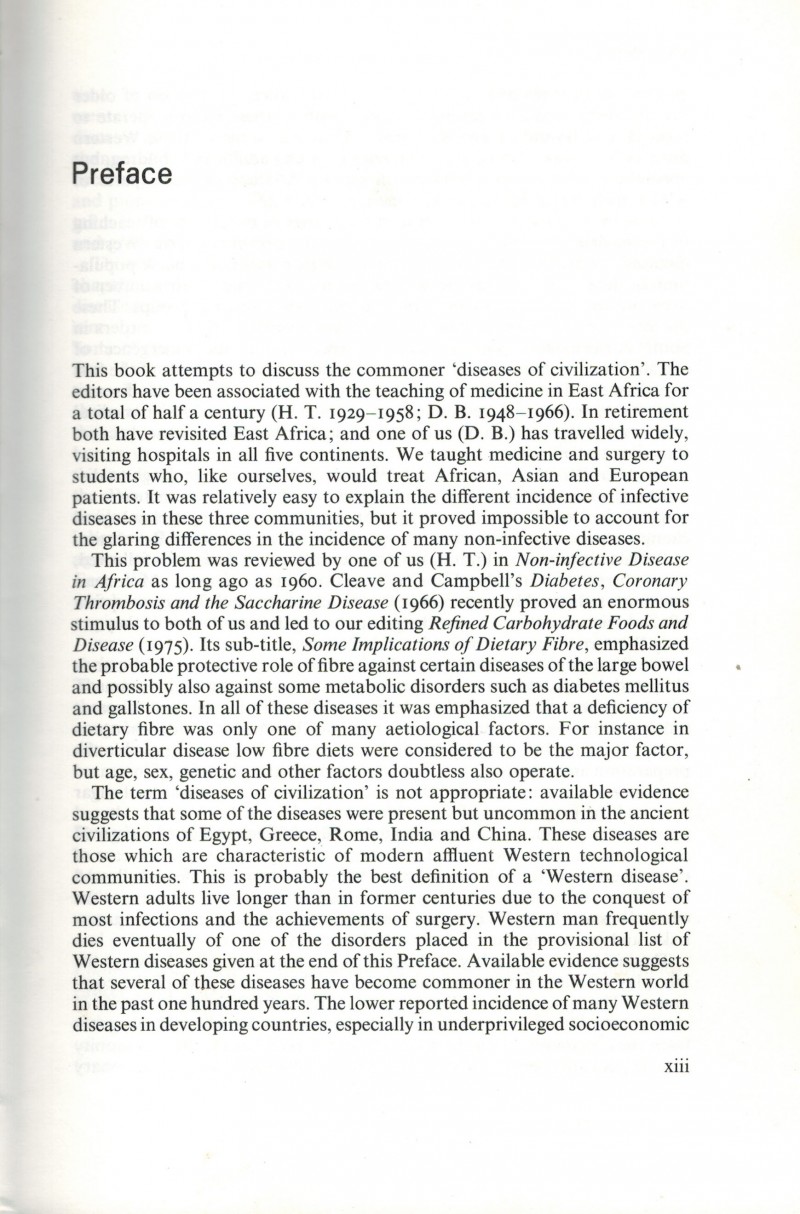 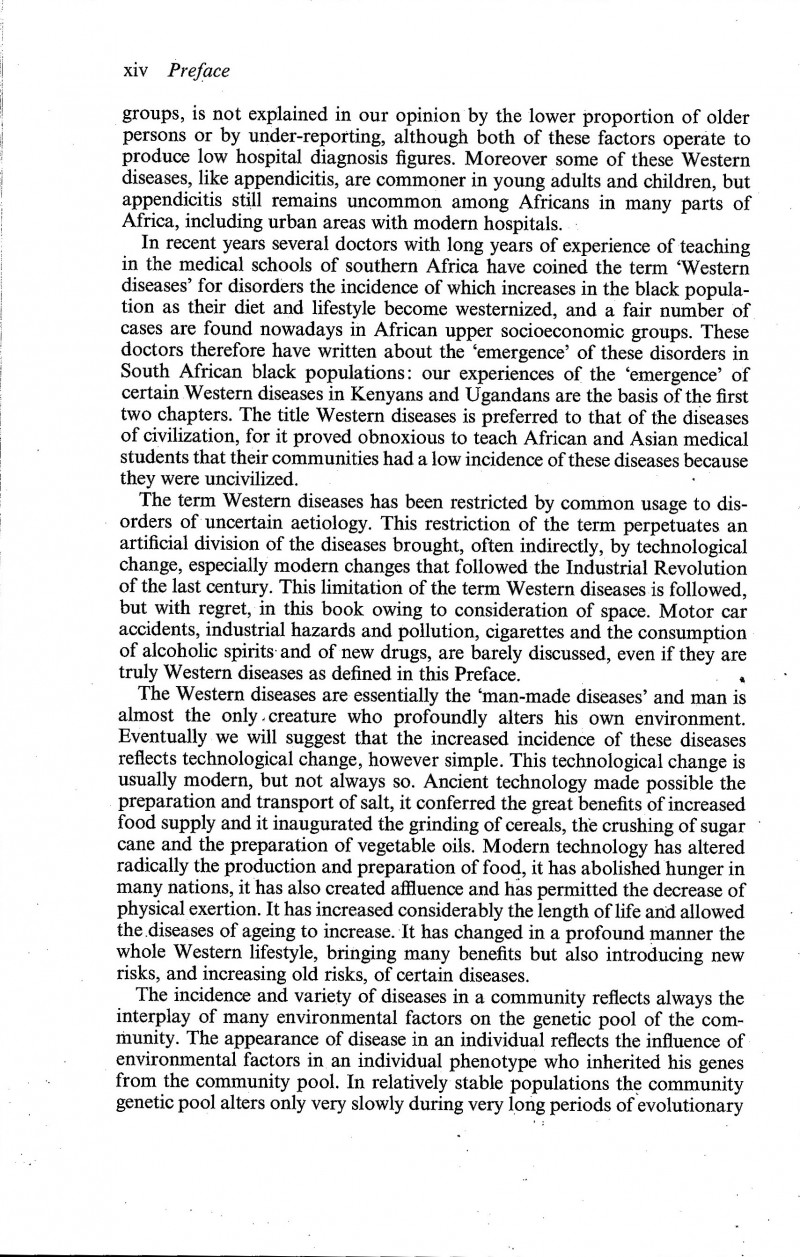 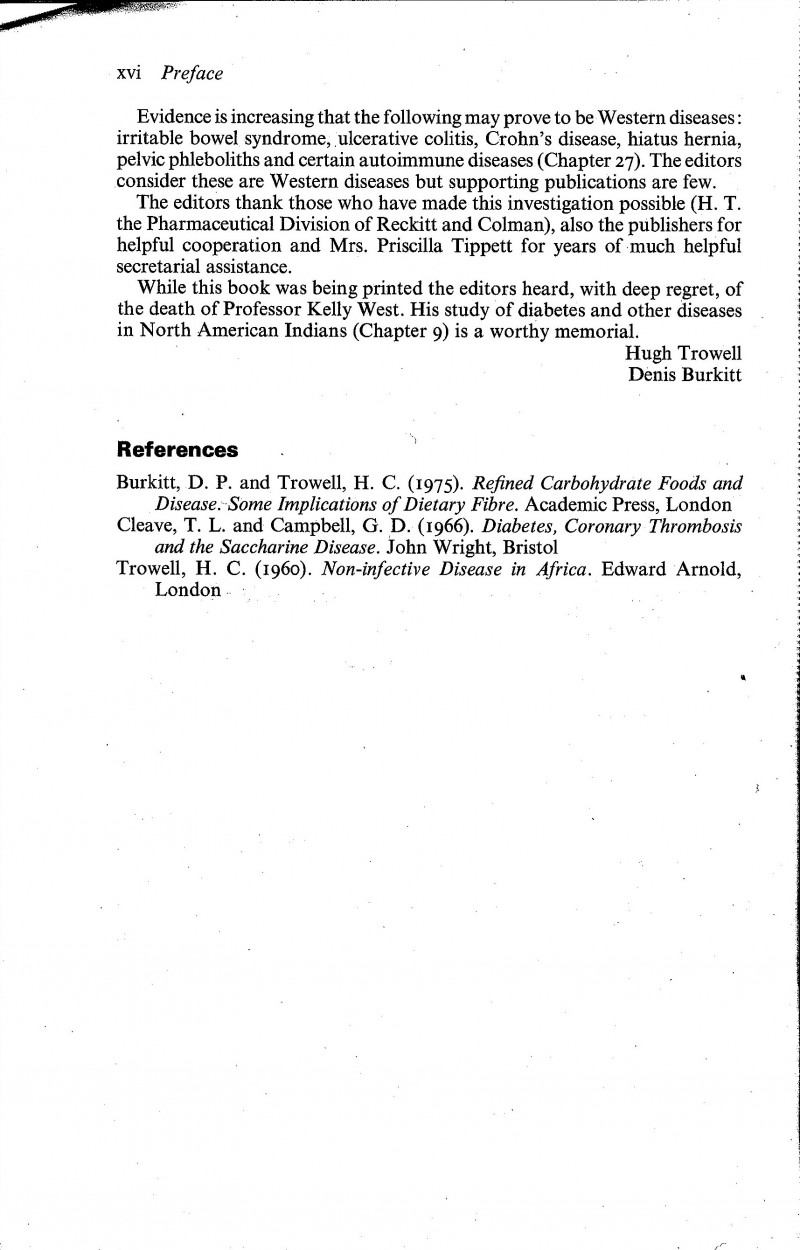 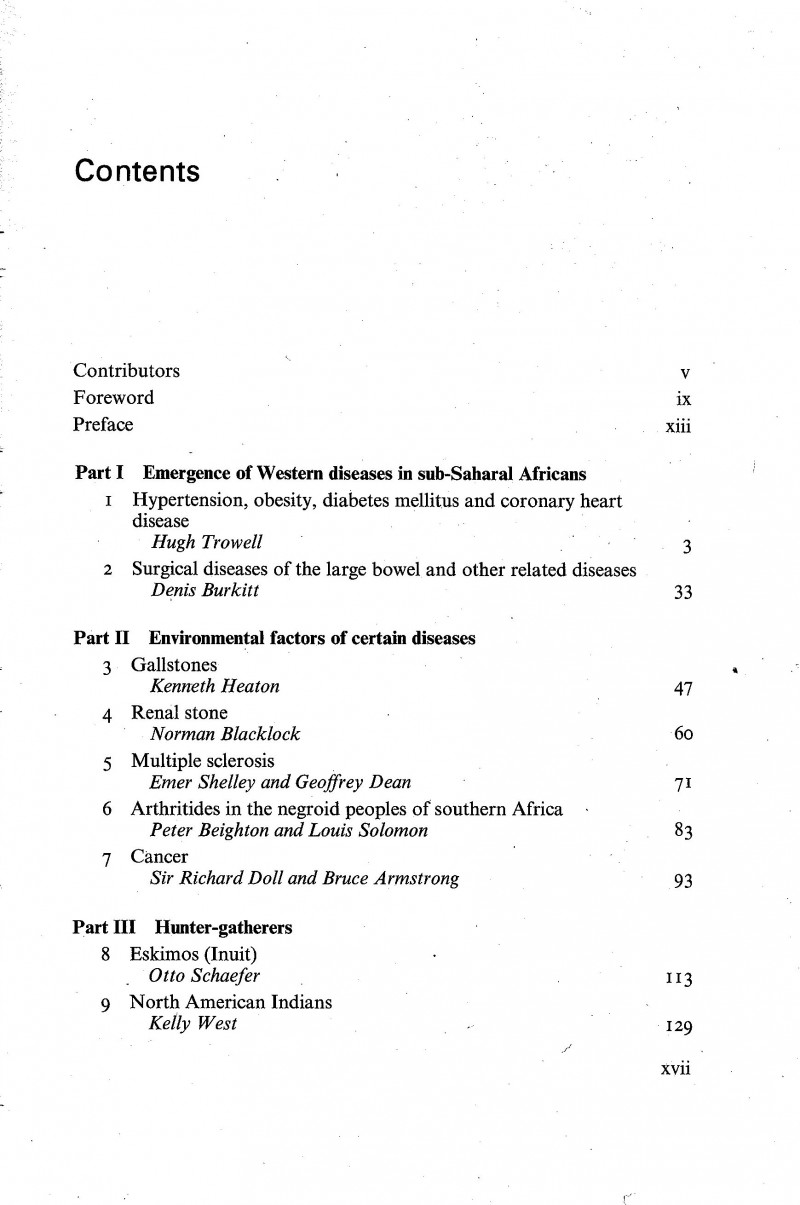 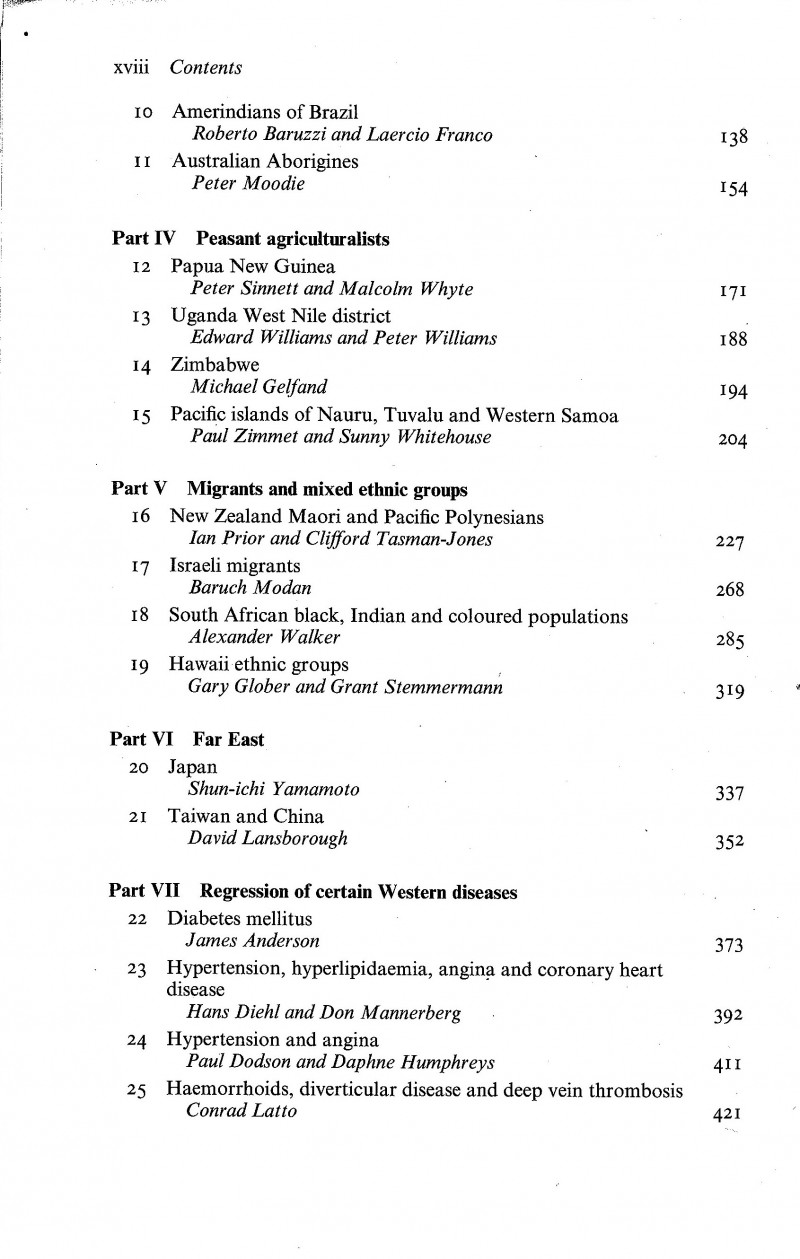 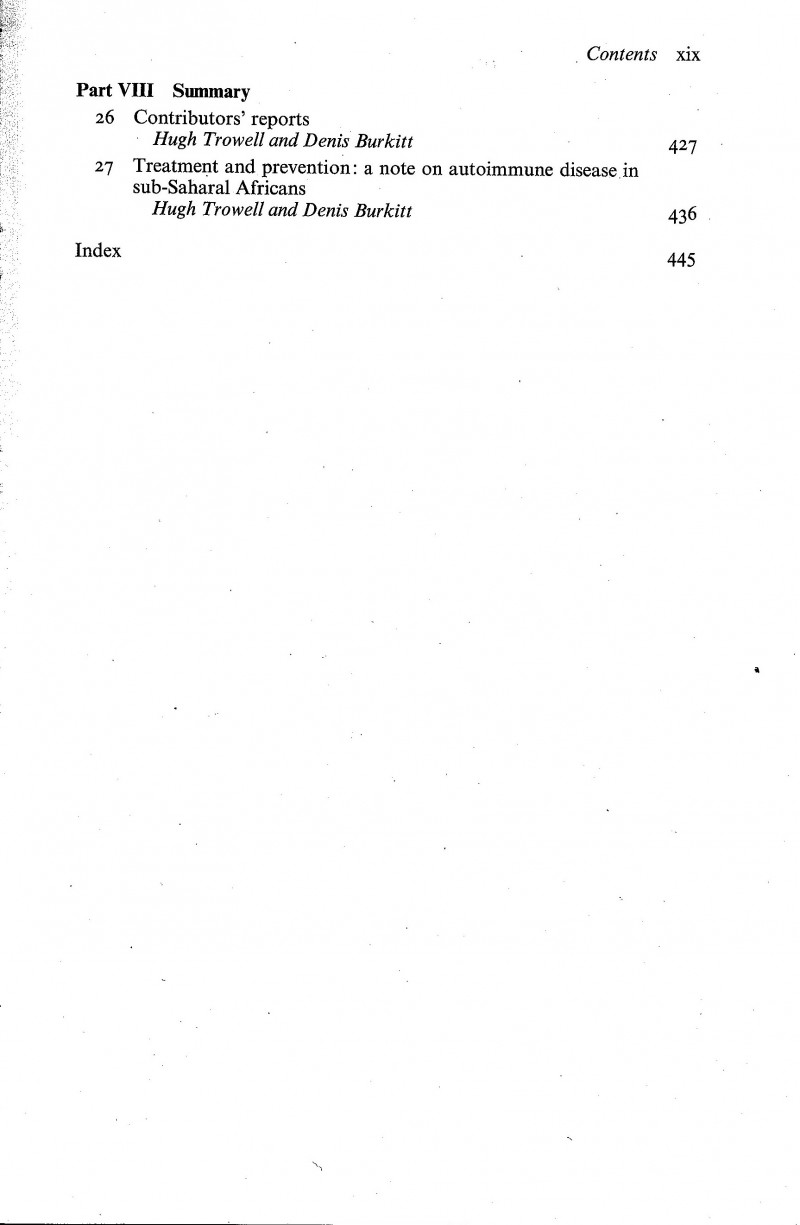 Abstract from Chapter 22 of Western Disease

This abstract from a chapter on Diabetes titled “Diabetes Mellitus” by James Anderson, looking at the impact of high fiber diets and their ability in some to significantly reduce, or even remove need for insulin, is particularly thought provoking, as is much of the books contents.

Clearly the sort of pre-western  diets eaten by those in Africa and elsewhere in the early 1900s, where diabetes  was virtually never seen by then doctors, were rounded, high in fiber, which is not comparable to the addition of singly sources of highly processed fiber to highly processed nutrient depleted diets.