‘Long before the year 2000, time will have amply confirmed the Cleave hypothesis, and over-refinement of food will have become part of our history. His name will be added to the roll of the great men who opened up new fields of discovery in medicine.‘

‘Like William Harvey, he was a born naturalist; his observations on the reaction of the human gut and metabolism to the onslaught of industrially refined carbohydrate food was part of his understanding of nature’s processes.‘

‘Cleave was one of the most revolutionary and far-sighted medical thinkers of the twentieth century, seeing far beyond the small vision of intricate details of individual diseases.‘

‘Cleave saw that many of the diseases of civilisation could be explained as the consequences of eating refined carbohydrate, pointing out the crucial fact that refined foods are an artefact of technological civilisation.‘

An example of Cleave’s powerful observations. 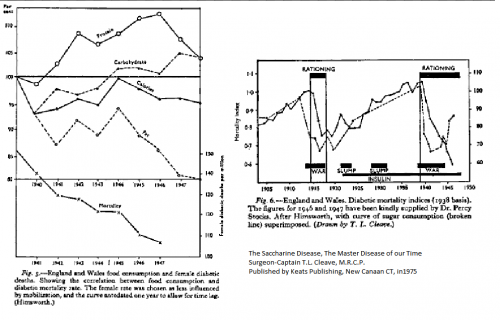