– “distinguished scientist and brilliant scholar, former Chairman of the Soils Department and a familiar name in the College of Agriculture, an important and author visionary and humanitarian”

He was particularly aware of the importance of minerals to plant growth (link), and responsible for studies looking at those effects, including the impact of crop rotation on mineral levels.

It is sometimes forgotten that minerals are composed of atomic elements, which are forged in supernova from lighter elements. They coalesce, and through eons and geological processes over time, become part of what we call rock. They are present in soils in finite amount. Fertilisation of soils does not create minerals, but only adds them back by applying other sources of minerals, such as ground up rock, or mineral containing substances such as organic matter, including once living material and excreta.

Most crops are now grown in the top three feet of soil. Imagine crops grown in a tea chest; the ground up rock that tea chest contains a finite amount of minerals, which will vary in composition according to the mineral geology of the originating rock source. Those minerals will over time be abstracted by plants, dissolved by rain water and transported away. Minerals will be replenished to some extent by wind blown dust, volcanic ash, abstraction by plants of minerals from deeper untapped soils, by excreta and dead remains of the once living.

Accumulation of minerals in retained organic matter, for example in virgin prairie, where roots may penetrate ten and more feet, can mine minerals from deeper soils by transporting minerals through root systems and including them in above ground growth, which will die off and compost over time, so adding to mineral in upper soils. However rates of mineral accumulation by such process are slow.

Crop rotation in a confined soil containers was found to increase the rate of abstraction of minerals. However, as noted above, in the natural environment, where deep rooting plants are used, minerals may be replenished from deeper soils. Rotation of shallow rooting plants (including grasses) is not likely to augment minerals, and conversely may speed mineral extraction.

Retained minerals will be depleted by mineral hungry crops, and particularly so where not replaced, as is generally the case in modern farming systems as outlined by David Marsh (link). As discussed by Albrecht, Weston Price and others, modern high intensity farming, and export of produce derived from the land directly or indirectly, including mineral containing grains, milk, meat and bones, is the equivalent to extractive mineral mining, resulting in depletion of minerals in soils. This ultimately will result in reduced mineral levels in crops, and is of particular importance in relation to regionally scarce minerals essential to plant animal and human health.

The extent of declining mineral content of foods, due to; breeding for yield with little regard for impact on nutrient content; use of NPK fertiliers which drive growth without commensurate mineral content; and decline in soil mineral soil content, are highlighted in this McCarrison Society ‘Nutrition and Health Journal’ paper looking at declines in mineral content of a basket of whole foods over 50 years.

Weston Price in his publications expresses similar concerns as to mineral extraction from soils, and export of them  in crops and livestock products to population conurbations, as part of modern food production processes.

We have lost sight of the soil nutrient value of organic matter including human and animal excreta, which were highly valued by traditional farming cultures, suitably composted and returned to the land. At the turn of the 1900s the Chinese paid  in gold for urban human sewage to export to the country side for compositing. People knew they were approaching a city because the surrounding land became more verdant. Farmers competed in encouraging travellers to use their latrines with original poetry and offers of tea. Even today Chinese recall it was regarded as being disloyal to the family to use another families latrine.

Before the availability of chemically produced nitrogen, and mined phosphates, organic matter as a component of plant health and yield was of necessity and survival very highly regarded.

Albrecht’s views are set out including in his book ‘Soil Fertility and Animal Health’, detailed below.

Albrecht – Central Tenants
“While President of the Soil Science Society in 1938, he had written in the Yearbook of Agriculture ”A declining soil fertility, due to a lack of organic material, major elements, and trace minerals, is responsible for poor crops and in turn for pathological conditions in animals fed deficient foods from such soils, and mankind is no exception.” “Perhaps his most controversial, most important, study was a review of World War II era dental records of 70,000 U.S. sailors. He linked the health of sailors’ teeth to the health of soils in their native regions of the U.S. In those days, people mostly ate foods grown on local farms or at least grown in their respective regions of the country. He concluded, “If all other body irregularities as well as those of the teeth were so viewed, it is highly probable that many of our diseases would be interpreted as degenerative troubles originating in nutritional deficiencies going back to insufficient fertility of the soil.” [2] With the end of World War II, Albrecht called for a major national initiative to restore the health and fertility of America’s “worn out” soils.

Career
“William Albrecht was not only a distinguished scientist and brilliant scholar; he was also a true visionary and committed humanitarian. He believed that animals, including humans, provide biochemical photographs of the soils in which their foods are grown. With effective and affordable commercial fertilizers after World War II, the health and natural productivity of the soil no longer seemed to matter. Albrecht risked his academic reputation by warning of the public health risks posed by this so-called modern, industrial agriculture. History provides compelling evidence that he was right. A half-century later, America is facing an epidemic of diet related illnesses, including obesity, diabetes, heart disease, hypertension, and various forms of cancer.”

This excellent biography of William Albrecht by John Ikerd from which the above quotes are drawn, provides a fascinating overview of Albrecht’s outlook, bravery and achievements is set out in full, along with some biogrpahy on Professor Ikerd (Link here.)

Published works
The Albrecht Papers include a number of titles including 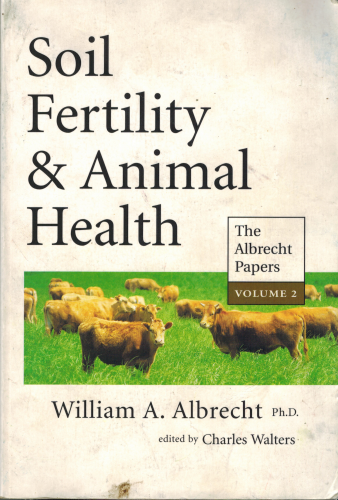 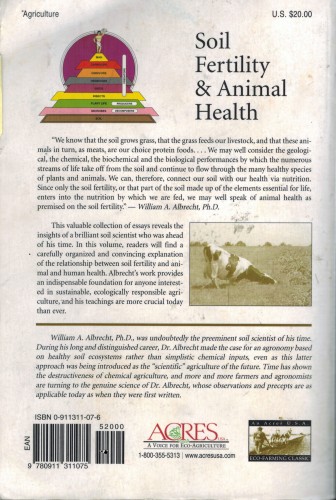 This is an example of some of the fascinating insights this book contains: 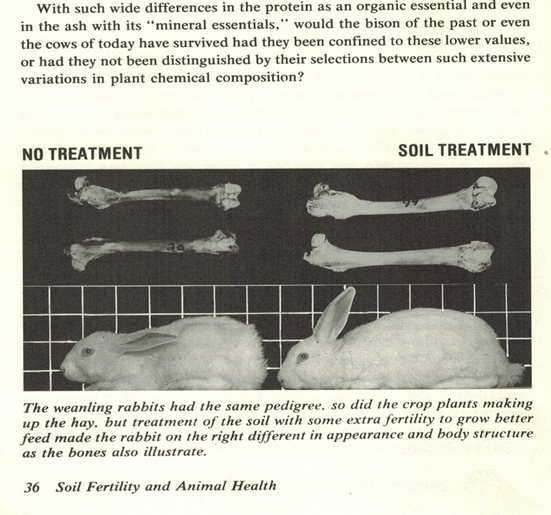 Albrecht’s other publications are also held by and on sale at the American Organic Farming publishers and event organisers Acres and can be found here Acres Web site link to Albrecht’s books, and related material (link).

”A declining soil fertility, due to a lack of organic material, major elements, and trace minerals, is responsible for poor crops and in turn for pathological conditions in animals fed deficient foods from such soils, and mankind is no exception.”

“If all other body irregularities as well as those of the teeth were so viewed, it is highly probable that many of our diseases would be interpreted as degenerative troubles originating in nutritional deficiencies going back to insufficient fertility of the soil.”

“The costs of growing healthy livestock and healthy people do not fit themselves readily into our economics where costs and earnings must always be matched in monetary values (dollars). We are slow to realize that good health is not a purchasable commodity. Health of plants, of livestock and of humans via proper nutrition… will not submit to solution by monetary manipulations.”

“The costs of growing healthy livestock and healthy people do not fit themselves readily into our economics where costs and earnings must always be matched in monetary values (dollars) lending themselves to subtraction, divisions, equations and summations in only arithmetical terms. We are slow to realize that good health is not a purchasable commodity. Its value transcends any price mark. We have lost sight of the fact that it must be grown into the body. It cannot be thrown in from purchases at the drug store nor introduced effectively as tissue implantations, or hypodermic and intramuscular injections by the physician’s needle and syringe. In handling livestock we can throw the fattening performance of the desexed male into high gear. But for the growth of a healthy body and its maintenance at that level, a guarded, steady pace for endurance and distance is demanded.”

“Our increase of wholly monetary views of agriculture, as if it were only an industry under economic pressures which consider all the costs and all the returns from it only in monetary values, have been–in no small sense–prohibiting healthy livestock. We need to take a new view of some phases of the farming business which do not balance out so readily in economic equations to be solved by no other factor s than monetary units. Health of plants, of livestock and of humans via proper nutrition is just such a phase which will not submit to solution by monetary manipulations. We need to shift away from the belief that all agricultural problems can be solved by such procedures under emphasis of the economics only.”